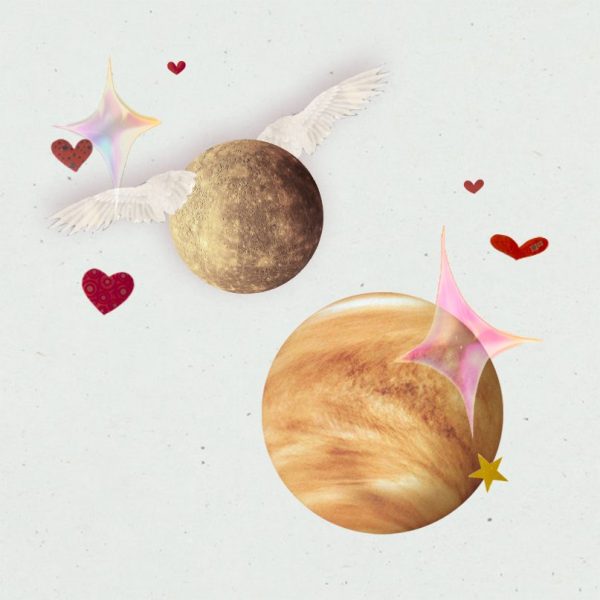 As if the holiday season weren’t chaotic enough, it’s time for another Mercury retrograde. This one will occur between December 29th, 2022, and January 18th, 2023. Mercury retrogrades always bring their signature tricks and delays — but not every retrograde period is created equal. While we can expect the planet of communication to get up to its usual hijinks between late December and mid-January, this retrograde opens on a gentle note. Read on to learn more.

This Mercury retrograde begins next to Venus

Mercury stations retrograde at 1:32 am PT on December 29th. A few hours later, at 5:58 am PT, Mercury will conjoin Venus, the planet of love, connection, and beauty. While the usual disarray will be present, this transit is supported by a sense of generosity and goodwill. When Mercury and Venus join forces, it’s a love letter. It’s pillow talk. It’s a compliment you really mean that makes someone else’s day. With Mercury retrograde, the words may get blundered, or you may arrive late to that date or New Year’s party, but this vulnerable display of your humanness is actually kind of endearing.

The other piece of this retrograde: It’s occurring in the earth sign Capricorn, which is known for stability and steadfastness. It’s not that things can’t go awry in this sign, but there remains a semblance of order. A will to problem-solve. A map for putting the pieces back together.

Now, this Mercury retrograde isn’t occurring in isolation. Mars has been retrograde in Gemini (a Mercury-ruled sign) since October 30th, 2022. So far, this has coincided with utter discord on certain social media platforms, as one of the major ones was taken over and stripped for parts just as Mars stationed retrograde. Since then, we’ve witnessed users cleverly subverting the system (setting up impersonator accounts to take down major companies), as well as an exodus of employees — due to hefty layoffs and resignations.

Mars’ retrograde ends on January 12th, about a week before Mercury’s retrograde ends on January 18th. It will take months for Mars to regain its speed and at least a few weeks for Mercury to recover its momentum. If possible, we would do well to follow this model. Don’t rush into the New Year with a daunting list of resolutions to pursue — your goals may be harder to sustain if you take on too much, too soon. With two planets retrograde at the start of the year, you can expect delays. You can expect mistakes. Do yourself the favor of greeting these slowdowns with compassion for yourself. That means: setting realistic goals with realistic timelines, which include room for rest, and despite your best efforts, redos. Mercury and Mars retrogrades remind us that we’re not robots. Our divine programming includes margins of error. And so it should.

You may or may not recall that 2022 also began with a Mercury retrograde: between January 14th and February 3rd, 2022. Part of this retrograde also took place in Capricorn, so you could notice echoes back to that time. Comb over old journals, calendars, emails, or text threads, and remind yourself what was on your mind then. Notice what’s coming back around for more understanding or healing, and affirm yourself for all that you’ve learned or resolved.

Even if you don’t notice throwbacks to the beginning of last year, this period at the end of 2022 and the beginning of 2023 will be ripe for you to reflect on all the ways you’ve grown and matured over the past 12 months. That’s the best way to use Mercury retrogrades, especially ones that bridge two years, like this one. Acknowledging your lessons and accomplishments will set you up to feel satisfied, grateful, and resourced as you enter 2023.

Or download the CHANI app on IOS for daily horoscopes, meditations,
affirmations, intel on the current Moon phase and sign, and more.

Use the CHANI app to learn how to work with these 2023 astrology key dates and more.