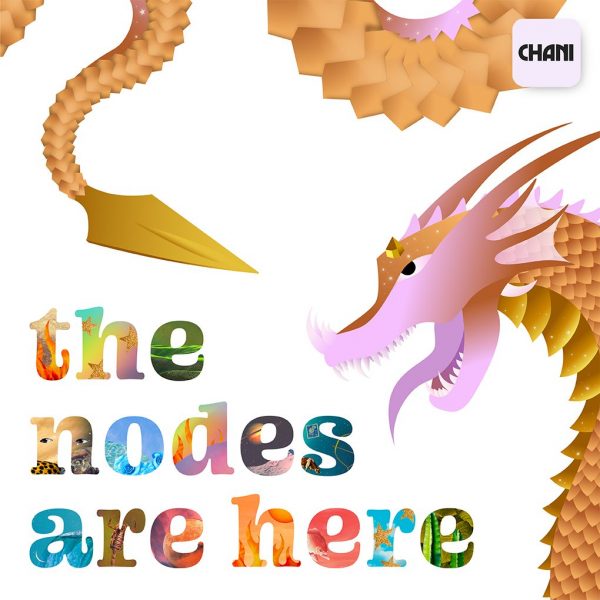 We are thrilled to unlock the next feature on the CHANI app: the nodes of the Moon. These much storied points in space have been mythologized as the head and tail of a voracious dragon.

In your birth chart, the North Node, or head of the dragon, indicates an area of life where you are insatiable. No matter how much you strive and seek and sweat, this hunger is bottomless. It can’t be filled.

The South Node is the tail of the dragon: a point of surrender. Here, you purge, renounce, release. Like a bout of food poisoning that cleans you out, this process is necessary, though rarely pleasant. The South Node is one mechanism through which your body, mind and heart self-purify.

At these Points, eclipses happen. When a New or Full Moon occurs near the North or South Node (every 6 months), the luminaries are temporarily snuffed out. For this reason, the ancients saw the nodes of the Moon as danger zones.

Work with the Nodes in 3 ways on the CHANI app:

1. Learn about your natal North and South Nodes and how they interact with other planets in your chart

2. Discover how the nodes’ travels through Gemini and Sagittarius are impacting you in the Current Sky.

3. Work with our new meditations and rituals for the North and South Nodes

Not seeing The Nodes? Try closing and reopening your app. If that doesn’t work read how to update the app here.

1. What are the nodes of the Moon?

Astronomically speaking, the nodes of the Moon are the two points in space where the Moon’s orbit around Earth intersects with the ecliptic (that is, the path the Sun traces in the sky from the perspective of us earthlings.) The North and South Nodes are always opposite each other in a chart (i.e. separated by 180°.)

In many cultures, the nodes of the Moon have been depicted as dragons. The North Node represents the head of the dragon — a point of increase, according to Hellenistic and medieval astrologers. The South Node, or tail of the dragon, denotes a dwindling, by contrast. A surrender.

2. How does CHANI app approach the nodes?

While many modern and evolutionary astrologers tend to read soul journeys into the lunar nodes, these points were traditionally viewed as danger zones. When a New or Full Moon occurs in proximity to one of the lunar nodes: eclipses happen. The lights we live by are temporarily extinguished.

While it’s hard to recreate this fear in the modern day, when so much of our light is artificial, imagine moving through a train station or office building, when all the lights shut off without warning. In the sudden dark, a primal panic or disorientation sets in.

Now imagine you rely on these lights for body-warmth, sight, agriculture, and all manner of day-time activity. Maybe you even perceive divine intelligence in these luminaries: you pray to them and leave offerings. Then suddenly: they’re snuffed out. It would be an ominous sign to say the least.

We view the lunar nodes as two points that nudge us toward extremes: excessive hunger with the North Node and excessive release or renouncing with the South Node. Like any balancing act, our nodal work requires attention and adjustment. It’s not comfortable to dwell on either extreme for too long.

The lunar nodes travel backward through the zodiac, which is why they’ll probably appear retrograde in your chart, though their actual movements tend to wobble back and forth. These nodes are always opposite from each other, and they spend 18 months in each axis, sweeping the whole zodiac every 18.5 years.

Using the “true” calculation, the nodes of the Moon entered Gemini and Sagittarius in the spring of 2020, and they will remain in this axis until January 2022. In this time, you may notice a hungry expansion in the Gemini corner of your chart, while you experience a ritual surrender or release in the part of the chart that houses Sagittarius.

4. My nodes on the CHANI app are in a different location than I’m used to seeing. Why?

The lunar nodes always move backward around the chart, but their real movements tend to wobble between retrograde and direct motion.

The mean calculation smooths out these minor wobbles by producing a mathematical average of the total movement.

The true calculation reflects the accurate location of the nodes at a given moment, rather than the mathematical average.

There can be discrepancies between true and mean calculations of up to 1°45’. For a smattering of people, that’s enough for the nodes to change sign and house depending on which calculation you use.

CHANI app uses the true calculation for the lunar nodes. If you’re used to seeing your chart from an astrologer or astrology software that uses the mean calculation, it could mean your nodes change sign.

Not necessarily. While the true calculation represents the most mathematically accurate location, astrology is a field that tends to make space for less materialist modes of knowing. Just like choosing a house system, many astrologers will decide at the beginning of their practice whether to work with the true or mean nodes.

You can think of it like a chef working in metric or imperial. There’s no “perfect” conversion between a cup of flour and 136 grams unless you’re pouring that cup onto a measuring scale to get the accurate mass. Still, it’s likely to be pretty close.

6. What does it mean if my true and mean nodes are in different signs?

There’s no clear answer on this. Some people resonate with both placements, while others feel more aligned with one calculation over the other.

Just as a planet in your chart may change houses depending on the house system used, there may be value in both calculations. It’s simply a shift of perspective.

If you notice a discrepancy with other apps or astrologers, we invite you to consider both options for yourself and reflect on what feels true for you.

7. Does the angular relationship between the nodes ever change?

No. The North Node of the Moon is always 180° from the South Node. That means they will always be in opposite signs.

8. What do the lunar nodes have to do with eclipses?

Although the Sun is 400 times larger than the Moon, it’s also 400 times farther away. That means they look roughly the same size from our perspective.

Recall that the nodes of the Moon reflect the intersection points between the Moon’s orbit and the Sun’s path in the sky from our view on Earth. That means that when the Sun approaches the transiting lunar nodes, the Earth, Sun, and Moon fall into the correct alignment for one of our luminaries to block the other’s light.

That’s why eclipse season happens every 6 months: because it takes the Sun 6 months to travel from one side of the zodiac (and node of the Moon) to the other.

9. Are the transiting nodes entering Taurus/Scorpio in December or January?

The “true” lunar nodes, which we use on the CHANI App, enter Taurus/Scorpio from Gemini/Sagittarius on January 18th, 2022.

10. This interpretation is a little different than the one I’m used to. Why?

There’s nothing wrong with this approach, but the CHANI app is rooted in more traditional techniques. Most hellenistic and medieval astrologers saw the nodes as points of danger due to their connection with eclipses. They also saw the North Node as an amplifier, or point of increase, while the South Node could serve as a cosmic release valve.

Thus while medieval and hellenistic astrologers treated the nodes with some wariness, many also suggested that the North Node could increase the good of benefic planets, like Venus or Jupiter, while the South Node may decrease their helpfulness. The same is true for the malefic planets, like Mars and Saturn. The North Node would theoretically increase the challenges, while the South Node might dwindle them — but there’s room here for nuance.

11. Why is there an eclipse happening in Taurus in November 2021 if the nodes are currently in Gemini and Sagittarius?

Eclipses happen when the Sun is within 15° or so of one of the nodes. On November 19th 2021, the true North Node will be at 1°41’ Gemini, while the Full Moon will be at 27°14’ Taurus. Though the Moon is in a different sign from the North Node, they are very close, separated by only a few degrees.

Eclipses are determined by the degree of the New or Full Moon, not the degrees of the nodes. Thus, while the true nodes are still in the Gemini-Sagittarius axis for another two months, the lunar eclipse itself will take place in Taurus. This tends to happen when the nodes are close to changing signs, like now.

The final eclipse on the Gemini-Sagittarius axis will occur on December 3rd at 12° Sagittarius.

12. What does it mean if my nodes are (or aren’t) retrograde?

The nodes of the Moon always move backward (or retrograde) around the zodiac. While the true motion of the nodes fluctuates, wobbling between retrograde and direct stations, their movements always progress backward.

13. Are the nodes physical bodies, like planets or asteroids?

No. The lunar nodes reflect the geometrically calculated points where the orbit of the Moon intersects the path of the Sun from our point of view on earth. Unlike planets and asteroids, they have no body nor mass.

14. Do other planets or bodies in space have nodes?

15.  Are there other names for the lunar nodes?

The North Node is also known as the Ascending Node (by astronomers); caput draconis (by medieval or renaissance astrologers); and Rahu (by astrologers in India.)

The South Node is also known as the Descending Node (by astronomers); cauda draconis (by medieval or renaissance astrologers who worked in Latin); and Ketu (by astrologers in India.)