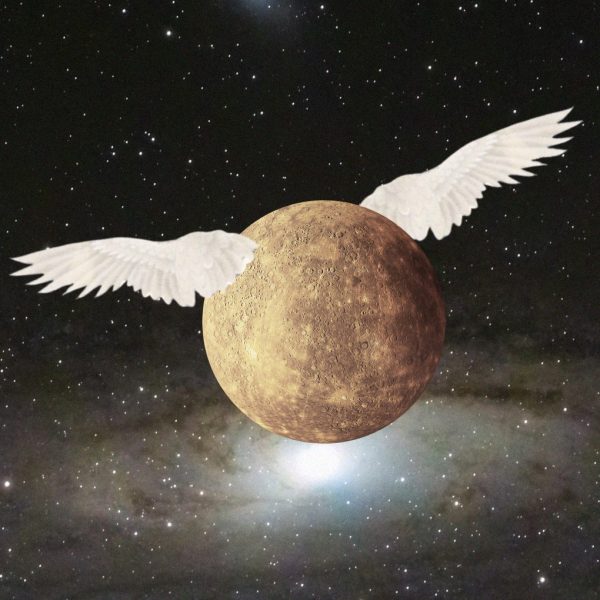 On May 10th, Mercury stations retrograde. Temporarily take the brainstorm platform back to private mode — at least until you’ve had time to decide how you want to communicate your message. This retrograde will support you in sorting fact from fiction. See here for a list of Dos and Don’ts.

Mercury retrograde makes a sextile to the sage advisor Jupiter. Even if we can’t act on the advice yet, we can certainly jot it down for future, wiser versions of ourselves.

Aha moments come funneling in when Mercury makes its inferior conjunction to the Sun during its cazimi moment. This is the only date during Mercury retrograde that has promise in regards to launching, announcing, or making magic. Cazimi moments offer the clarity otherwise withheld during retrograde season.

Mercury leaves Gemini for Taurus and the retrograde lessons pivot from intellectual to practical. The last 12 days of Mercury retrograde ask us to review our resources, tool sheds, and material lives. In Taurus, Mercury also wants to have conversations about what we value and how to plan around it.

Mercury stations direct in Taurus. The most notable thing about this moment is that Mercury is stationing direct near the fixed star, Algol. This is considered to be an incredibly challenging setup, one that points to the naming (Mercury) of suffering, betrayal and the horror of victim-blaming (Algol).

Because the Sun will also be conjunct Algol during the Scorpio eclipse on May 15/16th, this Mercury station direct feels particularly potent, charged, and referencing anything that is thematically similar within eclipse season.

Mercury reenters Gemini. This is a very enthusiastic Mercury. It’s direct, a morning star (rising before the Sun) and in its “diurnal” or day home. Think of the precocious child asking breathlessly why the sky is blue, then inquiring about the next natural phenomenon before you’ve had time to answer. This is that adorable, inexhaustible version of Mercury. You’ll want to watch your caffeine intake.

Mercury clears its post-shadow. This means that from June 18th onwards, we are out of the retrograde weeds. We are in the clear to plan, move forward, and find out just how important all the lessons were.

This is an auspicious time to pose your burning questions, and connect with those far and wide when Mercury sextiles Jupiter a second time.

Mercury trines Saturn and squares Neptune. Remember the information you gathered during the beta test phase of the retrograde. Bet on that data, as it’s the surest way to chart your course forward.

Read your horoscope to see how this Mercury retrograde in Gemini is impacting you!

We’re giving you a free gift to support you through Mercury Retrograde! From now until June 10th, new/returning users can redeem one free month trial of the CHANI app. With your trial, you’ll get access to weekly workshops designed to help you make the most of this retrograde season. To learn how to reedem this promotion, click here.

You can find and read more of your horoscopes for the current astrology here!